An Insider’s Guide to the Best of Chongqing Cuisine

An Insider’s Guide to the Best of Chongqing Cuisine

Chongqing is, depending who you ask, the Mountain City, the Foggy City or the River City. These three names accurately describe this southwestern Chinese mega city, as geographically close to Bangladesh as it is to Shanghai. Formerly part of the vast Sichuan province, in 1997 the city and its surrounding areas became an autonomous municipality. Chongqing is home to around 30 million people, fiercely proud of their city’s unique identity as a hidden metropolis. The Jialing river and the famous Yangtze river run through the region, joining each other dramatically at the urban city centre. Chongqing locals frequently spoke of their city’s reputation as a place of ‘hot weather, hot tempers and hot food.’ Nowhere is this reflected more than in the city’s most notorious culinary export and the star of Chongqing cuisine – the hot-pot (huǒguō.)

The Star of Chongqing Cuisine

Like the city itself, the hot-pot is largely unknown outside China. It’s failed to make an impression on the Anglo-Chinese takeaway menu offerings of sweet and sour chicken or prawn crackers. Yet, small unpretentious hot-pot restaurants feature in cities across Britain, catering largely to Chinese expat communities. The hot-pot is a communal dish and doesn’t have really have a close parallel in British food culture. The closest stylistic touchpoint might be Spanish tapas but that is still a far from ideal comparison.

Hot-pot is a large pan of simmering broth in which diners cook skewers of meat, vegetables and noodles (in that order) at the table. Chongqing hot-pot is about more than the food itself though; it’s a time to relax, to celebrate, to drink. It’s a real social event. The bigger the group of people, the better the hot-pot experience. The meal can stretch on for several hours, the broth topped up with water continuously as it becomes increasingly fiery.

The average hot-pot table seats groups of ten or more. Guests sit closely together around the pan of broth, which lies in a hole in the centre of the table. A gas burner lies underneath, keeping the broth close to boiling point. Whole chillies dot the oily surface and smaller, less obvious Sichuan peppercorns (hújiāo) lurk in the murky depths of the broth. It’s these peppercorns that provide the numbing sensation associated with the hot-pot. Crunch one of these tiny, bulbous kernels and you feel the initial citrus flavour give way to a gradually intensifying fiery tingle. The combination of chilli pepper (làjiāo) and hújiāo flavours plays a central role in Chongqing cuisine and is given the name málà, meaning ‘hot and numbing’. 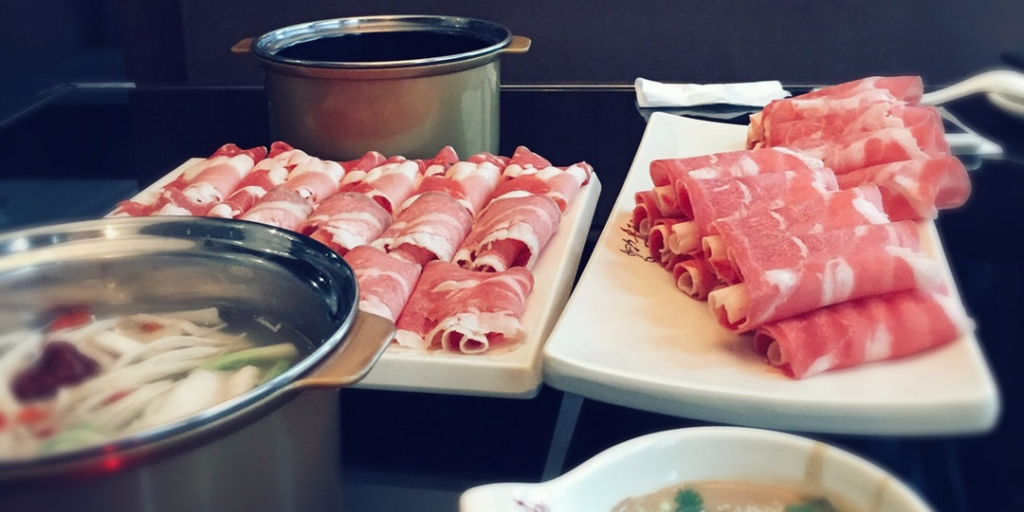 I arrived in Chongqing as a vegetarian and intended to remain one. However, I came to realise that it was fundamentally unsustainable for me, personally. Eating out with Chinese people presented different challenges though. I went out with my employer’s family and experienced my first communal ‘hot-pot’. Dishes piled high with tripe, cow stomach and duck intestine were placed around the table; opting out was not a consideration. A whole host of reasons meant that to refuse food from my host seemed just wrong. In Chinese culture, food is something to be shared and many different plates of food are bought to the table to be enjoyed by everyone. To refuse the food offered to me could be considered a rejection not just of my host’s generosity, but also of the country’s dining culture in general.

I ate meat for the rest of my time in China after this. That’s not that vegetables aren’t a part of Chongqing cuisine. In fact, they crop up everywhere, they just don’t tend to be the main part of the meal. The delicious stir-fried lotus root, cabbage or Chinese leaf with garlic come as accompanying dishes to the rest of the meal.

Eating together as a group is a wonderful Chinese tradition. Whether it’s a family hot-pot in the evening or a lunchtime feast with colleagues, mealtimes are extremely important in China. Since returning to Britain, our food culture has seemed conservative in comparison. When we eat out, there is little of the homely chaos of a Chongqing restaurant – diners eat quickly and quietly and out of sight of the kitchen. Perhaps the lack of a pub culture in China accounts for this difference, restaurants acting as the community social hubs. Chongqing cuisine is about more than just hotpot though and in fact forms part of Sichuan cuisine, often stylized as Szechuan on takeaway menus in the west. Over the course of my year in Chongqing, dishes like stir-fried pork with green peppers and black beans (yán jiān ròu), mashed cucumber laced with raw garlic and sesame oil (suàn ní huáng guā) and, a particularly pungent local delicacy, ‘stinky tofu’ (chòu dòufu) became firm favourites. Stinky tofu is one dish that boldly flaunts its strange and smelly appeal and is extremely cheap! For 5 RMB (around 50p), you could feast on a small paper tub of stinky tofu squares.

The food served in the region differed subtly from town to town. Once in early summer, some colleagues and I travelled east along the Yangtze.  We confined our travels to the greater Chongqing municipality and visited the old river towns of Fuling, Fengdu and Wanzhou. The staple dishes of Chongqing cuisine featured on menus along our journey downstream. Yet they were different enough that we could notice small differences in the addition or absence of certain ingredients.

Local diners in Fuling noticed our appreciation for Chongqing cuisine and remarked on our knowledge of the menu. They even bought us beer and gave us complimentary Fuling dishes that reflected the city’s proximity to the Yangtze. We received huge langoustine-like crustaceans fresh from the muddy water and very much still alive. This is another regional specialty, Kǎo yú, which is a whole fish baked in chilli oil, vegetables and hundreds of Sichuan peppercorns. 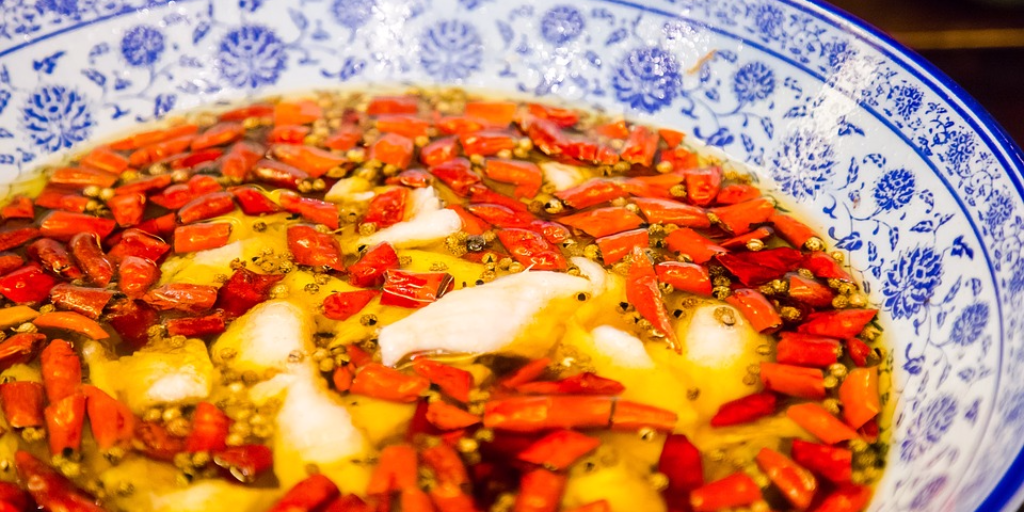 The traditional food culture of Chongqing was very much thriving. Late-night street markets serving skewers of barbecued meat and spicy, cold noodles were proof of this. Though, surprisingly Western food and restaurants were also wildly popular. During my time there, Costa Coffee arrived to join the hundreds of existing Starbucks, and Burger King outlets were springing up across the city. There is clearly a demand for Western style food. Chinese owned cafés and bakeries that emulate European tearooms are not only popular among the expat community. In fact, their clientele is largely young Chinese, keen to experience what they consider traditional western food culture.

It’s easy to smirk at the well-intended yet misguided fusion foods served in these places. Sweet potato latte and red bean cheesecake aren’t your typical European café offerings. Though, is this not simply a revealing look at how the average ‘Chinese’ takeaway in Britain must look to a Chongqing local? Have we as a nation not been getting Chinese food wrong for over 50 years? As China’s relationship with the West grows ever more important, we have to look to their interpretations of our food – the most sacred of any country’s traditions – and recoil and squirm. 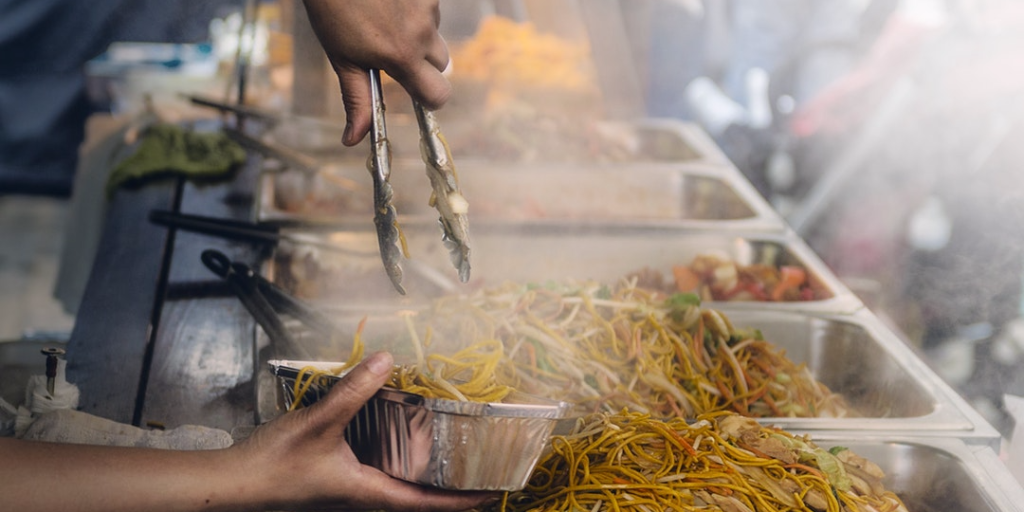 Chongqing cuisine is so important to the make-up of the city’s fabric that writing about these dishes throws up vivid images of the tight, winding streets and wide, modern plazas. It’s hard to separate the places from the foods. To experience Chongqing, all a curious traveller has to do is seat themselves at the table of a local restaurant and take in the smells, sounds and, most importantly, tastes of this incredible city that lies beneath the radar of the West’s narrow viewpoint of China.