Food and the Dining Experience in China

Food and the Dining Experience in China

Some of the biggest differences that I’ve come across so far during my time in China have been to do with the food and everything that comes with it. The food here is often delicious and can be so much better than anything we have at home, however that’s not to say it isn’t incredibly hard to get used to. The attitude towards food is different, the way it’s served is different, the way you are expected to eat it is different. And that’s without mentioning the differences in the actual food! While I of course still occasionally crave Western food, it’s difficult to when the food here is always so exciting and always coupled with such a rich experience. In this post I’m going to talk about all the different foods I’ve tried and the general experience that you are faced with when eating in China. 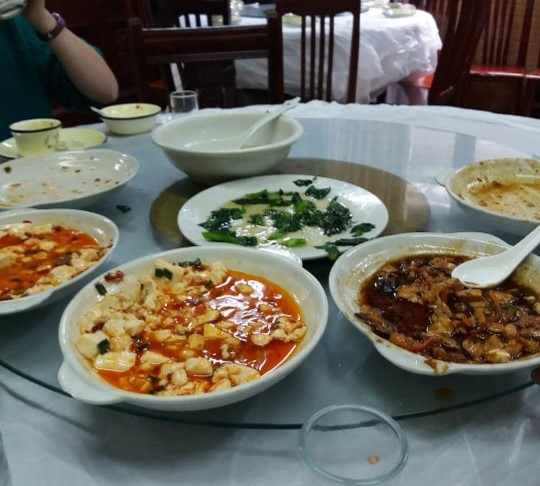 We have been generously treated to dinner by other local English teachers a couple of times in the last few months. This is where I tried the majority of the new things I have eaten since being here in the safety of English speaking, friendly Chinese people who can tell me both how to eat it and what exactly ‘it’ is. I have tried eels, pig feet, lake snails, goose feet, preserved eggs and most notably… snake! It took me a while to get on board with that last one as I have always loved snakes but couldn’t pass up the opportunity to try it as a delicacy. After being told what it was, I had to explain to the table that I was hesitant due to the fact that I have a pet corn snake at home. But I quickly realised that I may never get the opportunity again and grabbed a piece.  Luckily it was already cut up into A6 page sized chunks so I didn’t have to look at its face! After a couple of deep breaths and saying a silent apology to Anya (my snake at home in England) I took a bite. And I’m kind of ashamed to say it was one of the tastiest things I’ve had since being here! Sorry Anya! The meat had an almost fishy texture but with a unique and incomparable taste. But the best bit was the skin, which had been clearly marinated in something amazing and grilled to perfection. I’m not sure if it was the actual taste of snake or the way that it had been cooked that I loved so much- but either way, what I expected to be a traumatic experience in fact turned out to be the opposite.

A goose foot was also quite a big one for me. One of the first notably unusual experiences we came across in China was people eating and selling chicken feet. At first we thought it was a one off but we quickly discovered that chicken feet are for sale everywhere. You see them on street food stalls, in restaurants, in supermarkets where they’re sold in various different ways. You see children gnawing on chicken feet on the street. Everybody seems to be all about the chicken feet! So when asked if I wanted to try a goose foot, it felt rude not to. It almost felt like an initiation into living in China. Again, it took me a couple of seconds to tuck in and I’d love to say that when I did I understood why everyone loves them so much. But unfortunately, this is one that I just did not understand. They are almost impossible to eat with little to no meat on them and while it tastes nice, the amount of food you get compared to the amount of effort you put into getting it just does not add up for me. I would recommend trying it though; you haven’t done China properly if you haven’t tried munching on a bird’s foot!

Something to note about eating out in China is that a lot of the time it is a sharing culture-especially if you eat at a restaurant with a big spinning disc in the centre. This means that if more than one person orders the same thing, it’s unusual and they sometimes find it difficult to understand what it is that you are asking for. As well as this, it means that sometimes the portion sizes are not what you are expecting. This could go either way- bigger or smaller. We once made the mistake of ordering five portions of rice (one each) only to see it get brought out in a washing up bowl sized dish! Luckily, they hadn’t quite understood what we had ordered that time and we ended up with no rice at all. But better than the mountain of rice we had technically ordered. Personally I’m a huge fan of this type of dining. I like being able to try new things without having to commit to eating an entire meal of it. However, I can understand why a lot of people would not approve of feeling obliged to share what they had ordered for themselves, but it really is a great way to try new things. 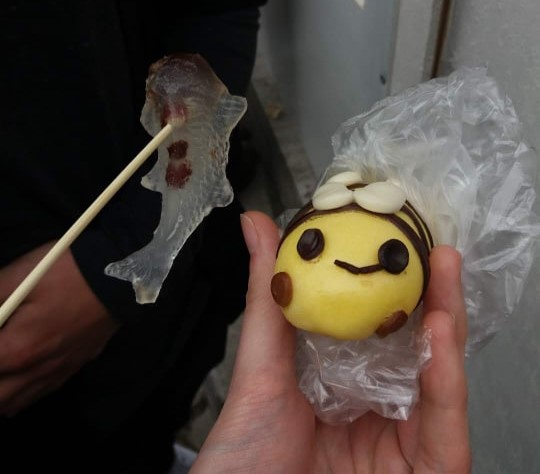 When dining in China, there are also a couple of things that are a little odd, different and at times confusing- especially at first- in the way people eat. Of course, you are thrown in at the deep end with chopsticks. You generally get used to them quite quickly but until then- be prepared for friendly banter about your inability to use them. If you can already use chopsticks, prepare yourself for comments about your cleverness, questions about where you learned and almost disappointment that you’re not providing the entertainment of being unable to get the food from the plate to your mouth. As well as chopsticks, you may also be given a pair of plastic gloves with certain foods. What we would consider to be finger food is often served with gloves, but also things that we would use a knife and fork for, such as big chunks of meat or whole sweet potatoes. Another use of the gloves is when you have to prepare the food first when it has already been doused in sauce, such as de-shelling a crayfish or taking the spine and insides out of an eel before eating it. The plastic gloves allow you to eat these kinds of foods without getting it all over your hands and making a huge mess- although I’ve yet to find the technique and still somehow end up with sauce not only covering my hands, but my body and face as well.

All in all, eating in China is almost always a memorable experience. Every part of the dining process is very different to the way we do it in the West. The ordering, the system and of course the food itself is hardly ever what you’re expecting. I have eaten things in my first two months here that I never dreamed I would be brave enough to. I am actually quite proud of how well I’ve done with trying strange, new and exotic foods and I can now safely say that it doesn’t freak me out (as much as it did) if it still has a face when it arrives on my plate!

If you’d like to follow Amy’s teaching journey in Suzhou, you can do so in our Teacher Blogs category.