How Safe is China?

How Safe is China?

When choosing the best place to live and work, safety is an extremely important factor. Considering its low crime rates and high pollution levels, you might be wondering just how safe China really is. Generally, very but we’ve put together some of our teacher’s key safety concerns to help you decide for yourself!

In terms of crime, China is recognised as being one of the safest countries in the world. Tough law enforcement, a 99% conviction rate, and draconian criminal penalties act as harsh and effective deterrents to serious crime. China certainly feels safe, and many foreigners report feeling far more comfortable walking around late at night here than in their home countries. You’re unlikely to witness fights, and any drunken misconduct tends mainly to happen among expat crowds. Harsh punishment isn’t only reserved for Chinese citizens, so foreigners should be careful not to land themselves in trouble after a few drinks.

While serious crime rates are admirably low, pick-pocketing is known to happen in the larger cities. Be especially careful of your belongings during peak travel times, in queues, and at markets.

Unlike law enforcement, traffic enforcement is extremely lax. In fact, you’d be forgiven for thinking rules of the road don’t exist in China, where drivers frequently run red lights, undertake, and boldly pull out without a glance. While official rules exist, they are certainly not practiced, and instead drivers tend to go by the unwritten rule that the person in the bigger vehicle has right of way – even in the most absurd of circumstances. Don’t assume this means you’ll escape the chaos by choosing to travel by foot; passengers aren’t exempt from this practice and will frequently find themselves playing chicken with electric scooters zipping up the pavement. The rules of the road (or lack thereof) certainly take some getting used to, but they’re nothing to worry about. Be aware of your surroundings and never assume it’s safe to cross, and you’ll soon get used to the mayhem.

Food safety has been a contentious topic in China in recent years, but the authorities are cracking down on bad practices through the implementation of a new hygiene rating system. Today, restaurants and supermarkets of all sizes and standards are required to clearly display their food hygiene rating, awarded to them by the local Administration of Quality Supervision. These plaques rate establishments either ‘good’, ‘satisfactory, or ‘poor’, using a green, yellow or red smiley (or unhappy) face. While the number of restaurants displaying the ‘poor’ rating suggests there is no minimum standard restaurants must meet to stay in business, it is certainly an improvement and gives customers the opportunity to make an informed decision.

Many advise against eating street food, but we speak from experience when we say it can be perfectly safe, not to mention delicious. When it comes to street food, use your eyes, nose and best judgement to determine whether or not to eat it. Often, if the stand has a long queue of locals, it’s good!

It’s important to remember that sometimes it doesn’t matter how clean the kitchen is; when you’re eating foreign food, you may well get sick. It may take time, but you will adjust! 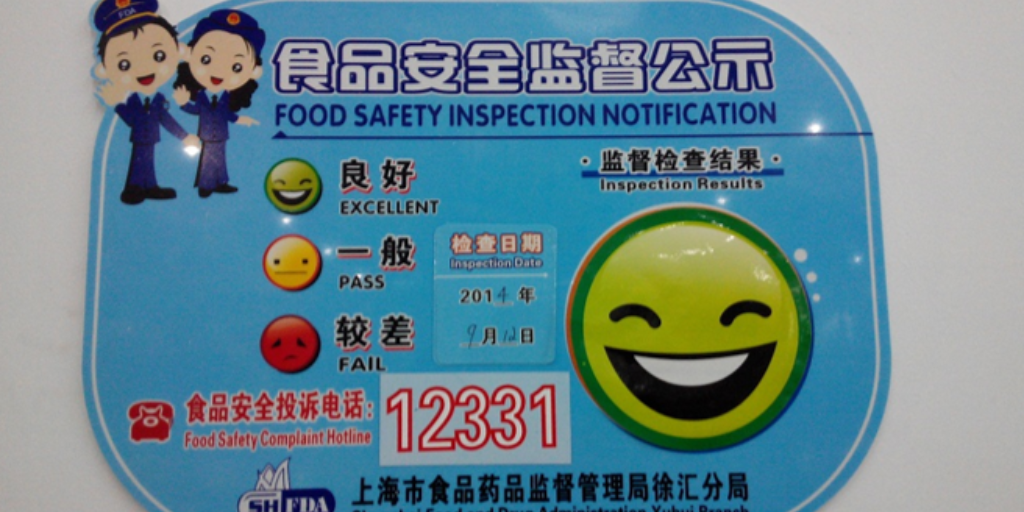 As the most frequently discussed safety issue in China, pollution is by far the greatest concern among foreign expats. There’s no denying the environmental and health concerns it poses, though it’s worth noting that short-term stays of a few years aren’t thought to cause any long-term health problems. That said, if you suffer from asthma or enjoy regular vigorous outdoor exercise, it’s advisable to avoid necessary exposure.

Of course, that doesn’t mean a trip to China is off the cards; pollution levels are higher in the north, so southern cities like Guangzhou, Fuzhou or Xiamen offer great alternatives to anyone concerned. It’s also worth noting that the government is now making efforts to reduce pollution levels, which are gradually decreasing year on year.

Foreign travellers should always be aware of tourist scams in the places they’re visiting, and China is no exception. Though not as widespread as in other major Asian cities, tourist scams are known to happen in China, or more accurately Beijing and Shanghai. By far the most well-known is the ‘tea scam’, whereby a young Chinese person (usually a female) will approach you and ask if you will help her practice her English at a local tea shop. Those that agree are then shown to a tea house and later presented with an extortionate bill that must be paid in order to leave. Many tourists have fallen victim to this and have been left with a bad impression of an otherwise extremely friendly and honest population. Most Chinese women are extremely shy and reluctant to speak to foreigners, so if a confident young lady approaches you, chances are it’s a scam (sorry guys!). Similar to this is the ‘art gallery scam’, where a self-proclaimed ‘Chinese Picasso’ will request you step in to his gallery and admire his art.

In popular tourist destinations like Beijing or Shanghai, you may be offered a ride by an unlicensed taxi driver. These are known to overcharge foreigners and sometimes drop them in strange areas. Always err on the side of caution and take a marked city taxi, which can be found in all cities and look similar to that in the picture.