Georgia Bellis-Jones: How I Passed HSK 6 in 18 Months

Georgia Bellis-Jones: How I Passed HSK 6 in 18 Months

Hi, my name is Georgia, I’m the founder and CEO of Jinyo (英有尽有), and I’m also a TEIC alumna. This is a blog piece for anyone interested in learning Mandarin, a bit concerned that it might be too difficult, that it may take too long, or wanting to find out the best way to learn.

My main goal in going to the second time was to learn Mandarin to a high enough level to use it in my work, in the fastest time possible. I’ve always been a bit of a language geek, but I was quite naïve when setting my targets. I figured that if I fully threw myself into it, then I could get it done within about 6 months. Needless to say that after 6 months, despite good progress, that certainly wasn’t enough time! In the end I managed to pass the HSK 6 exam after just under 18 months.

During my time in China, I met a lot of other westerners, all with varying levels of Mandarin and varying levels of motivation in learning it. I met some people who’d been living there for 5 years or more and couldn’t speak or understand any Mandarin whatsoever, and some people who’d attained a high level after just a couple of years. No matter what your goal is in terms of the language or your natural aptitude for learning it, don’t worry! If you want to enjoy China life but don’t want to learn the language, you really can still get by and have a great time. Having said that, I’m obviously an advocate for having a go and learning Mandarin!

‘Study until you collapse!’

Despite Mandarin being known as the most difficult language in the world, it’s really not that bad and there are ways to break it down; you aren’t just confronted with a page full of Chinese characters in lesson 1! When I started learning in small group lessons in a private language training school, they first taught us the standard ‘sounds’ in Mandarin (there are a limited amount of sounds that are always pronounced in the same way) using the standard Pinyin system. Pinyin is the phoneticised version of Chinese characters – meaning that learners can actually read and sound of the words. Most sounds are easy to pronounce (e.g. ni hao – hello), but there are some sounds that westerners find really hard to pronounce since they don’t exist in our languages and our tongues simply aren’t trained to create that sound (e.g. ri / ci / zi)! So as you can imagine, we all looked a bit ridiculous attempting to spit these out correctly and failing massively.

After learning the sounds, we then moved on to tones. This added a whole other level of difficulty (and something else to remember). There are 4 tones in Mandarin, plus a neutral. In most languages, we of course only change our tone to reflect our emotion, plus it’s entirely up to the speaker as to the tone they use. So it feels very unnatural at first to have a prescribed tone for all words and to actually remember the tone for each word when stringing together a sentence. ‘Tone deaf’ takes on a whole new meaning! However alien it seems at first, I promise that the more you listen and practise, the easier it becomes and you will slowly become able to distinguish the difference and pronounce them correctly. My tip: I used to use my hand to represent the tone, in an attempt to remind my voice which way it was supposed to be going! Sounds silly, looks silly, but actually really helps.

Once we learned the basics using Pinyin, AKA ‘the training wheels’, we started using a text book which paired had the pinyin printed below the equivalent characters. So we started pairing them and reading both. Eventually you start to try and rely more on the characters, only checking the pinyin occasionally to remind you of the pronunciation or the tone.

I started off in group classes, and this was twice a week each for 2 hours. This was a good way to ease into the learning process, but the issue was that everyone was there for different reasons and wanted to learn at different rates. So after a few months, I started private lessons in order to speed up the process and be able to push myself.

“2 classes a week doesn’t sound like much” you say? It’s not! Sadly I didn’t go out there with huge amounts of money saved up so I managed to study for about 3 months using up what I did have saved, and then I worked part-time in order to fund the classes. BUT – this doesn’t mean I only studied during my limited class time. I actually treated it like a full-time job. I would go to my local café every Monday-Friday for at least 6 hours per day. I was probably that café’s best customer! I would basically practise my writing and write out characters over and over again, and to be honest this worked well because doing this in class time is a complete waste of your contact time with your teacher.

One of my biggest turning points was when I started making friends with Chinese people who didn’t speak much English. If I wanted to get to know them, I was forced to speak the language, and I was forced to look words up in the dictionary that I didn’t know instead of just saying it in English and relying on them to know what I was talking about. They were also able to help increase my fluency and ‘localness’ by teaching me popular phrases, slang, as well as cultural aspects I’d have never learnt in the classroom. They were always so happy to help and speak a bit slower than they usually would. My tip: Don’t be embarrassed to make mistakes and sound stupid – it’s going to happen either way but the only way you’ll improve is if you just get a thick skin and get on with it. With a smile preferably!

HSK is the official exam series for Mandarin and there are 6 levels. Level 5/6 are the levels at which you can start to use your Chinese to use it for work. Because I was focused on getting to that level, I didn’t take levels 1-4 and just kept studying until I and my teacher felt I was ready for Level 5. The best way to prep is to have a good teacher, and to do a lot of practice papers. Level 6 really is a commitment (a vocabulary list of 5000 words to know, recognise and write) and you have to work very hard to get it under your belt – but it is possible! 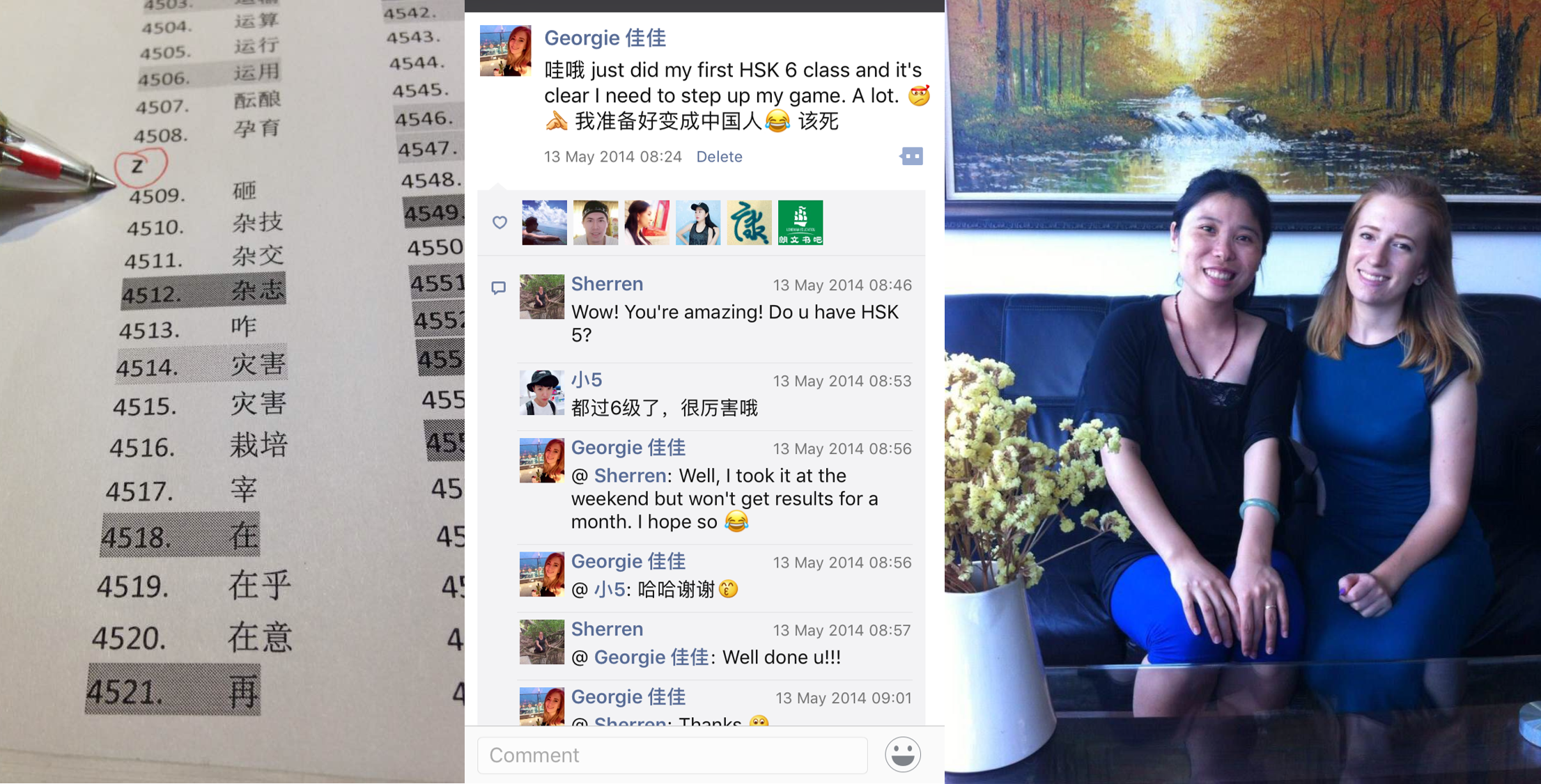 So unfortunately, I don’t think there’s a secret shortcut or key to learning Mandarin quickly. It’s about putting yourself in the right environment, working really hard, making friends who speak the language and using it wherever and whenever you can.

If you want to learn in the UK, are preparing for a trip to China or have come back from China, make sure you come down to one of our social networking and language & culture exchange events in London. We have over 120 Chinese and Western students and young professionals at a great venue in Zone 1, all there to make friends and speak both Mandarin and English.

Good luck on your language-learning journey, and hopefully see you at an event!