What Is Dragon Boat Festival?

What Is Dragon Boat Festival?

Dragon Boat Festival, known in Chinese as 端(duān)午(wǔ)节(jié) is a traditional holiday that happens yearly to commemorate the life and death of the famous Chinese scholar Qu Yuan. Taking place on the fifth day of the fifth month of the lunar calendar, this public holiday sees most schools and businesses close for the day.

Where Did It Originate From?

It’s common belief that Dragon Boat Festival originated in ancient China following the suicide of Qu Yuan, a popular poet and statesman during the Chu Kingdom. As the story goes, Qu Yuan was exiled by the King, who was threated by his intelligence. Devasted and furious at having to leave his people, Qu Yuan later drowned himself by strapping a rock to his chest and jumping into a river. Despite attempts to save him, Qu Yuan passed at the age of 61. The Dragon Boat Festival has since been celebrated to commemorate Qu Yuan’s life and the people who tried to save him.

What Do People Do?

What we today know as Dragon Boat Festival traditions all originated from the story of Qu Yuan. Though the rapid development of modern-day Chinese society has led to many of these traditions being lost, some do still remain, and events and activities take place across the country in celebration of the holiday.

The Dragon Boat Festival is typically celebrated with a delicacy known as zongzi, a special type of wine, and dragon boat races. 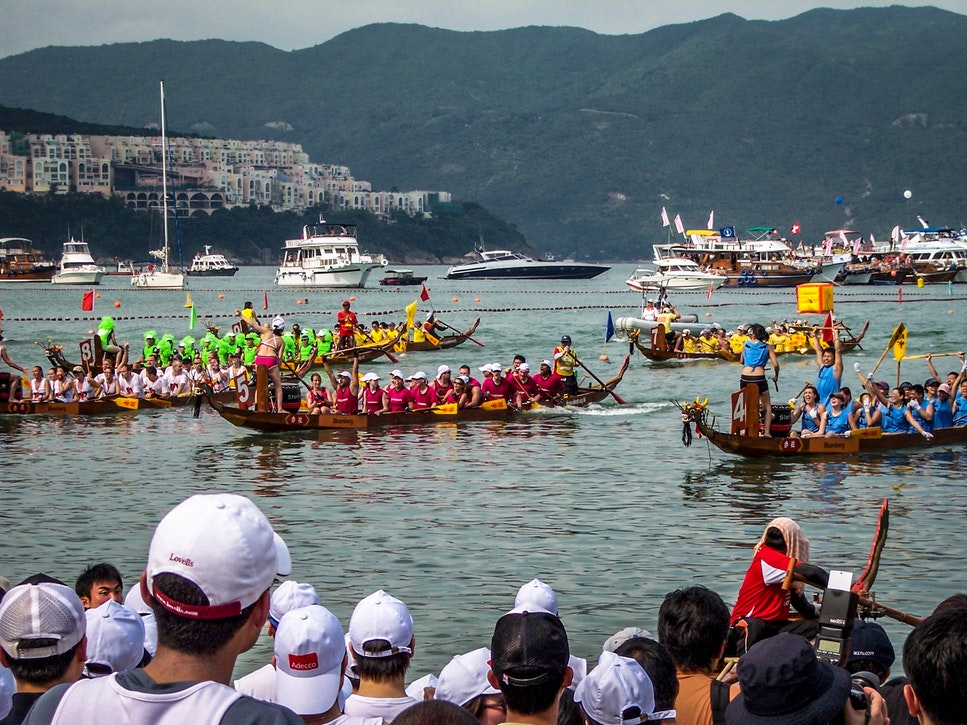 Annual Dragon Boat races are a symbol of the attempts to rescue Qu Yuan’s body. Upon hearing of his suicide, local people paddled out on boats to attempt scare fish away and recover his body. This led to the establishment of dragon boat races, which are symbolic of the rescue attempt.

Dragon Boat races were adopted as a modern international sport in Hong Kong in 1976 and have since become a popular activity around this time both in Hong Kong and mainland China. Dragon boats are a type of paddle boat traditionally made of teak wood and decorated with brightly coloured design that make them stand out. Boats come in different shapes and sizes and can have as many as up to 80 rowers at one time.

The races begin with a traditional ceremony, in which the dragons’ eyes are painted, and it ends when the first team is able to grab the flag at the end of the race, thus winning.

Zongzi are a type of glutinous rice dumpling containing various fillings and wrapped with bamboo leaves. This traditional snack came to being when the local Chu people began wrapping sticky cooked rice in bamboo leaves and throwing it into the river in the hope that they were heavy enough to sink and reach Qu Yuan’s body.

Other traditions such as hanging calamus and wormwood on doors or windows exist, though they are much less common nowadays.

What Can I Do For It?

Dragon Boat Festival is not considered as important as the Spring Festival holiday, so you won’t find that there is a huge amount you should do to celebrate. That said, if you are staying in China for the holiday, we highly recommend seeing if there are any dragon boat races going on. These happen in most cities across the country, and they are certainly worth seeing at least once. Be warned though, they will be busy!

Besides Dragon Boat Festival, there are plenty of other national holidays you can enjoy as a teacher in China. Here’s all you need to know about them.

Want to experience Dragon Boat Festival next year? Join our State School Teaching Programme and see it for yourself.